Employee on a mission to bring awareness, diversity to data analytics

“I’ve talked to a lot of people with similar stories about how we felt working in less diverse areas. When they tell me what I’m doing is important, that’s what motivates and inspires me to keep doing it.”

“I wanted to solve complex problems and do something where I would always be learning,” says Richard, business intelligence analyst. “Once I joined the company as a credit card associate, I would look at different openings at USAA, and when I came upon the data analyst roles, I was immediately intrigued. I liked that I could see the exact qualifications on the job description.” 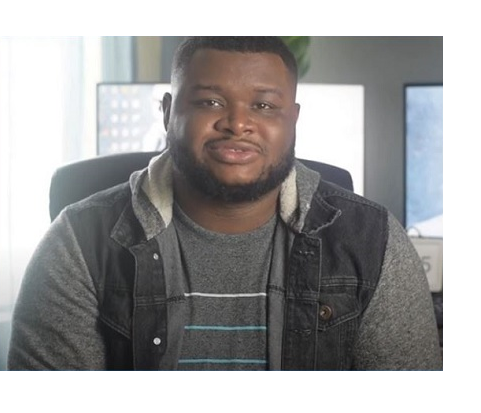 To obtain an analyst role, Richard knew he needed a degree to be a competitive candidate, so he used our education assistance program to earn not one – not two – but three degrees.

About a year ago, he reached his goal and transitioned to his role in Actuary and Analytics (A&A) in P&C.

“I walked into USAA with no degree, no certifications, and now I have three degrees and two certifications,” says Richard. “Next year, I’m going back to school for my doctoral degree.”

Richard says there is a lot of opportunity in A&A, as it’s an area instrumental to business decisions. Recently, he completed a dashboard and resulting report on how quickly member claims are closed out. Put simply, A&A works to improve business processes by collecting and analyzing data.

“If you don’t know these positions exist, you don’t pursue them,” says Richard. “There is a slew of these kinds of positions that pay very well.”

Since starting his role in A&A, Richard noticed people of color were underrepresented in his field of work. Having grown up in a low-income neighborhood in Miami, he knows it’s likely because of a lack of awareness and opportunity.

“In my first large A&A meeting, I noticed there was not one other African American person in the room," says Richard.

Since then, Richard made it a point to find other people of color in his field, which turned out to be more difficult than he thought. While he always toyed with the idea of starting his own YouTube channel, he didn’t know when the right time would be.

“I would always go online to see if someone like me was telling his or her story about working in this field, but I couldn’t find anyone,” says Richard. “When we started having conversations about racial equity recently, I knew I had to do something to bring awareness of this field to the community I come from, so I started my channel.”

Richard uses his YouTube channel as a way to connect with other people of color who might have interest and questions about data analytics. He hopes to inspire people to consider careers they might not otherwise hear about.

“I’ve talked to a lot of people with similar stories about how we felt working in less diverse areas. When they tell me what I’m doing is important, that’s what motivates and inspires me to keep doing it,” says Richard. “I’m not trying to be a YouTube influencer – if I inspire even five people to consider a career in data analytics, I feel I’m on the right path.”

The trademarks, logos and names of other companies, products and services are the property of their respective owners.